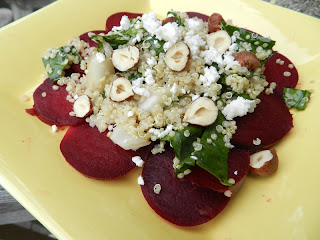 Once a  week this summer, I've tried to make a new salad using grains and veggies.  Making it on Sunday afternoon, it provides several days of lunches for Don and I through the week at work.  My goal has been to not repeat a recipe, and so far, so good.  It certainly helps that there are so many vegetables in season right now!  I'm not sure how much longer I can keep this challenge up, but it's 12 weeks so far and I don't see an end in sight. 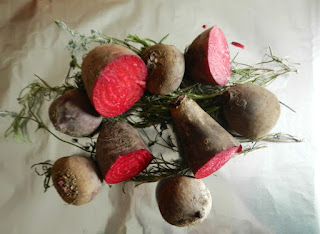 Beets are an absolute favourite around our house.  When Josilin was younger, she would pull them from the garden and eat them raw; dirt and all.  My mom grew them in her small garden growing up and they were always presented as jewels on our plate when harvested.  I often think on this when serving food to both Jos and Luke.  What memories will they take forward that will shape their dietary choices? 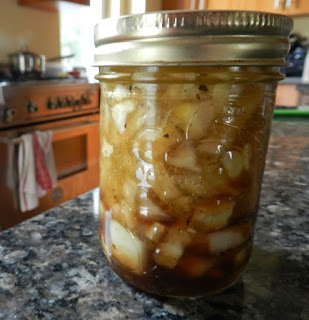 This recipe roasts the beets with fresh rosemary in the foil pouch.  It adds a real woodsy flavour to the beets but doesn't over power the salad entirely.  When making the quinoa, I prefer to drain the grain rather than allow it to soak up all the liquid it's cooked in.  This keeps the quinoa on the firmer side and less likely to be a mushy mess.  It will keep in the fridge for a few days; making it a great salad to take to your next potluck or pack on your lunch for the week. 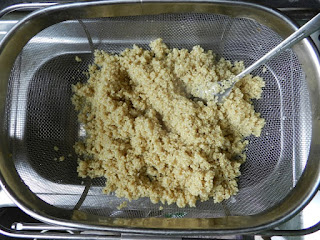 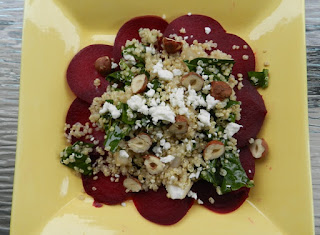 Preheat oven to 400degrees.  On a large piece of foil place the rosemary sprigs.  Lay beets on top of rosemary and seal up foil to make a pocket.  Place in oven for 40-50min until fork pierces through.  Remove from oven and when cool, peel and slice beets.  Reserve.
In a large pot, add quinoa to 2 cups of boiling water.  Continue cooking until quinoa is just tender; about 10min.  Drain and reserve in a large bowl.
In a jar, combine onion, lemon juice, olive oil, and vinegar.  Shake and allow to sit at least 30 min and up to one day.
Add dressing to quinoa and toss.  Add kale and hazelnuts and stir.
On four plates, lay beets and then top with quinoa mixture.  Top with feta and a generous grind of sea salt and pepper.  Enjoy!