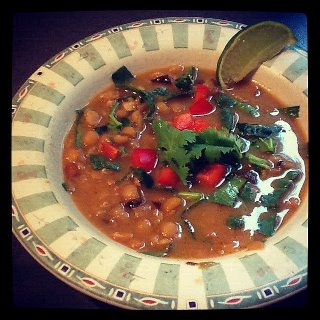 Something from  nothing- isn't that what we all want?  I love when I'm able to pull together a recipe from ingredients that I have on hand already.  Unfortunately, more often I'm inclined to pick up new products, use about half the package and then stick it up in the cupboard for another day. 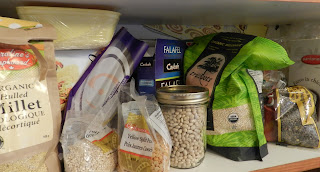 How many of you have a shelf like this?  I know, I know, it should be organized and labelled in pretty little jars. That's just not going to happen these days and so the shelf grows and the ingredients sit. 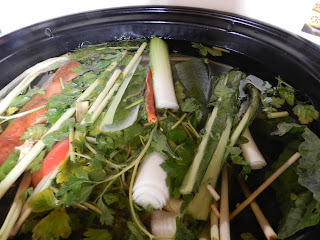 This soup came together with the intent of using up some of these half used products.  I started by making my own vegetable broth in the slowcooker, also using up odds and ends of vegetables in the crisper.  The tops of the fennel, the stalks of the parsley, the outer layers of the lemongrass, the ribs of the kale, tops of the leeks and the bottom of the peppers.  All items that normally would make it into the compost, but on this day, became the base of a beautiful soup.  Of course you can also use nicer parts of the vegetables, but I really love the genius of feeling like I magically made something so tasty without spending a cent. 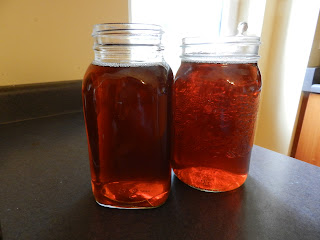 Sometimes before going to bed, I'll throw all these veggies in the slow cooker and leave it on all night on low.  The next morning I strain the broth and throw it in some mason jars for use later that day or freeze for use in the future.  Once you start making your own broth, it's very hard to go back to the boxed variety.  I've been known to just drink this stuff straight up: it's that good. 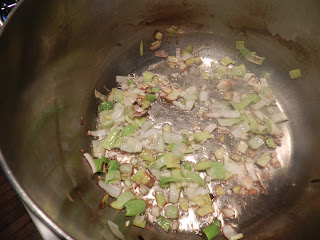 The yellow split peas in this soup added a real heartiness and the lemongrass, coconut flavours shone through. There was a hint of spice coming through but didn't overpower the other flavours. It was a perfect lunch on a cloudy Sunday in April. 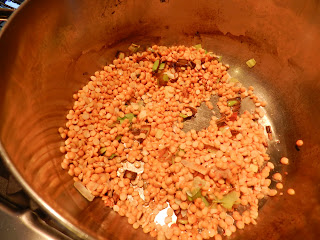 In a large pot on medium heat add oil and then add leeks.  Sauté leeks until softened (about 3 min) and add garlic and heat through (1min).  Add curry paste and stir throughout.  Add split peas and vegetable broth.  Bring to a boil and then reduce heat and simmer for approximately 30 min.  Add sambaal oleek and coconut milk.  Cut the spinach in bite size pieces and distribute between four bowls.  Ladle hot soup over spinach and top with cilantro, red pepper and lime.  Enjoy! 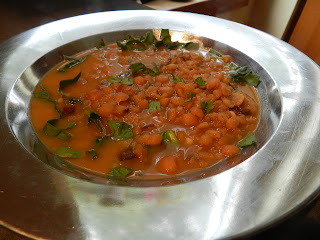 Vegetable Broth
(all vegetables optional; create your own combo from what's in the crisper)
green part of leeks
tops of fennel
bottoms of parsley
bottoms of cilantro
one carrot
one onion
4 celery stalks
outer leaves of lemongrass stalk
stem and bottom of red pepper
ribs of kale
2 prunes
2 tsp salt
pepper
2 bay leaves
1 dried pepper
to make broth:
place all ingredients in slow cooker. Cover with water and allow to cook 10-24hrs on low. Strain and reserve for future use.﻿
Posted by Unknown at 21:26