This past month I participated in a new venture called Foodie Penpals, organized by Lindsay at the Lean Green Bean.  Basically the program entails receiving and giving a package full of food goodies with complete strangers.  It was my first time participating and what fun I had!  My package was sent to rural Newfoundland with a request to send local goodies.  The package I received came from Ashley in Halifax, Nova Scotia.  It contained a pkg of chocolate hazelnut granola, red pepper jelly, a Newfoundland chocolate bar, treats for my kids, some family recipes and a jar of bakeapple jam.  The kids were absolutely thrilled that a stranger would think to send them candy!  It was such a thoughtful touch to include something for them.  I was excited to try the bakeapple jam, which I’ve learned is made from a fruit native to Newfoundland.  Made by Ashley’s father, this delicacy was something I had never even heard of before.  The bakeapple is not an apple at all, but rather a fruit closer to a blackberry with a uniquely tart flavour. 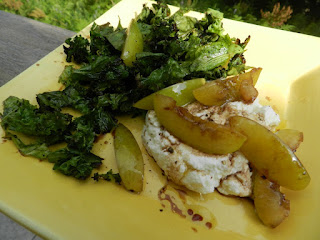 Coming up with a name for a blog is no small decision.  Forever linked to whatever I may choose to post and share, the title of your blog cannot be changed or removed.  I’ve had a few people ask me “why Kale Eats?”  I wish the answer was an exciting one, but I’m afraid it’s pretty tame.  I originally had a few other ideas that included the word kale, but the domains were already taken.  When setting up on the host site it gave suggestions as possible alternatives and Kale Eats came up. 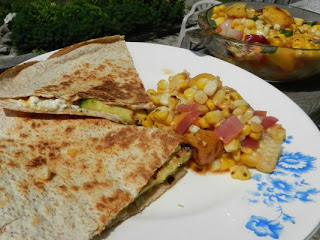 I was about to apologize for another zucchini and corn recipe.  I've recently made corn salad and zucchini sandwiches and was feeling a little guilty about hitting you over the head with more of the same. Before I let that guilt settle in I shook my head and realized, there's no reason to apologize for eating seasonal fresh veggies!  In fact, I bet your farmers' market is full of zucchini, corn, peaches and onions right now too.  What better way to celebrate these great offerings than to create multiple dishes. 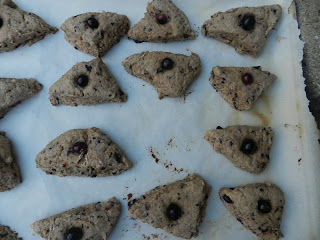 It will be a sombre week for our family.  We're attending an inquest into the accidental death of a loved one.  Perhaps it will provide some much needed closure or some understanding of how it all transpired.  We don't really know what to expect, but we will go and hope that something positive can come out of it all.
Read more »
Posted by Unknown at 19:28 No comments: 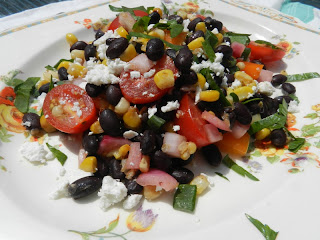 We're just back from a few days at a cottage with family.  For the last twelve years, we have gathered as a family of grandmothers, aunts, sisters, cousins and children.  My kids have attended this tradition every year of their life, including both as newborns.  There were a few years there when we had 6 children under the age of five where we started to question our sanity, but overall it's been great.  One of the perks is that this group of women and children are always keen to let me play chef for the week.  In exchange, I'm excused from washing dishes --THIS is the ultimate payment for me. 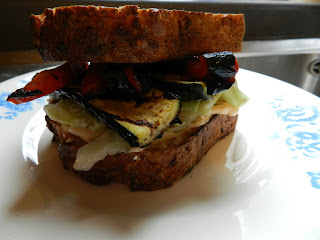 Dog days of summer of here.  Hot days, hot nights and lots of zucchini growing in the garden.  This sandwich might just be my new favourite use.  Fairly quick to assemble, you'll have this one from garden to plate in under twenty minutes.  Don's favourite food is sandwiches and lucky for me, he is game to try almost any combination.
Read more »
Posted by Unknown at 17:54 No comments:

We've just returned from an amazing vacation.  Killarney Provincial Park, considered the crown jewel of Ontario's Provincial Parks is a beauty to behold.  Spending five days surrounded by pristine nature, white quartz mountains and crystal blue water is my idea of a wonderful time away.
Read more »
Posted by Unknown at 06:15 No comments: 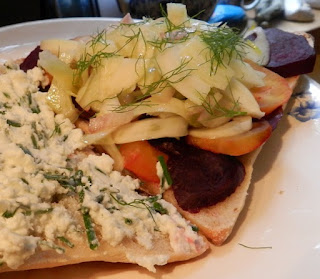 We are heading out to one of my most favourite places in Ontario this week: Killarney Park.  It will be a blissful five days of no phones, screens or contact with the outside world.  Packing food that will last in the wilderness without refrigeration is a wonderful challenge.  We usually try to eat as many veggies as we can the first few days as it gets tougher each day out to keep them fresh. 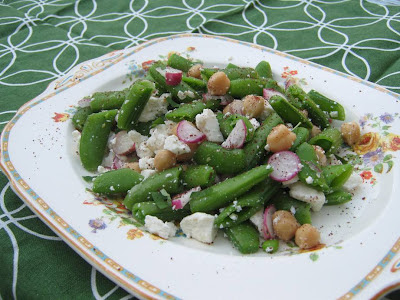 For the last four years I have been participating in a local CSA (Community Shared Agriculture).  It has amazed me how many new vegetables we have been introduced to and that the kids love.  Picking up fresh, local, organic produce for 20 weeks of the year has undoubtedly led to much healthier meals at our home. 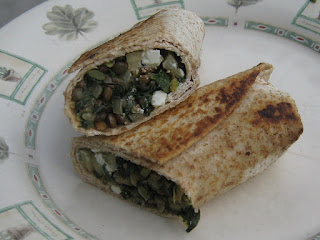 Don's out of town and took our camera with him.  I had resigned myself to no food blogging while he was gone, but this sandwich changed that idea pretty quick.  I dug out Josilin's camera to give you a small peak of the finished product.  The quality of the pictures might not be as good, but the  quality of this wrap is high!