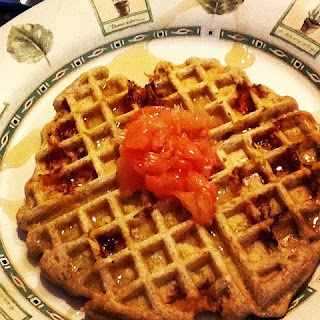 Every school day my kids start their day off with a hot breakfast.  I've had more than a few moms call me crazy for doing this over the years, but nothing makes me happier than sending them out the door with a full stomach to start their day.  It also has the added advantage of creating less pressure to ensure their bagged lunch is meeting their nutritional needs, especially when I know how often it comes home only half ate. 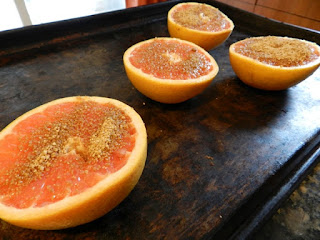 Coming up with new hot breakfast ideas has it's challenges, but mostly it is a lot of fun. We've tried many different waffles and I like that I can easily sneak in a lot of nutritious ingredients.  We have had waffles made with carrots, zucchini, sweet potato and all kinds of flours, seeds and grains,  but I had never seen grapefruit in one before. 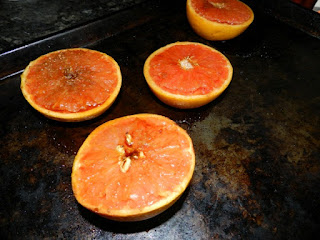 That was until I was surfing my newest guilty pleasure: Tastespotting.  Think Pinterest but exclusively food.  When I saw this picture I knew I needed to give these a try and they did not disappoint.  The bits of grapefruit provided bursts of fresh flavour combined with the crispy edges. Both Don and I were fighting over the bits of grapefruit to put on top so I think next time I'll roast an extra one just for additional toppings. 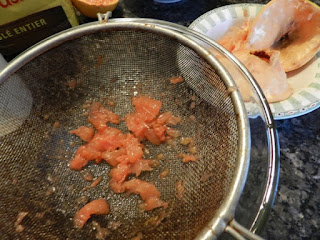 I altered the original recipe to accommodate both the ingredients we had on hand and also to include elements I knew we liked.  I replaced the white flour with some ground almonds to up the protein content and subbed in whole wheat flour for more fibre. 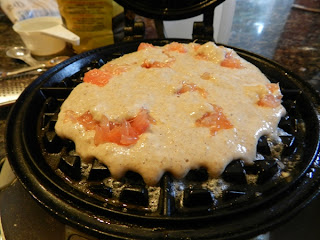 ﻿
These would be nice served for brunch on a weekend.  When I made them on Sunday morning we had some leftover batter.  I put it in the fridge and used it for the next two mornings, which made my work day even better.  I'd be tempted to make the batter on a Sunday afternoon and just store it away to use as a quick and delicious breakfast on a dreaded Monday morning. 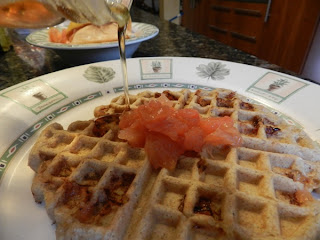 Preheat oven to 400degrees.  Combine the milk and lemon juice and set aside.  Remove 2tsp of zest from grapefruit.  Slice grapefruit in 1/2 and then run knife around the edges of the fruit and between the membranes.  Sprinkle brown sugar on top and bake in oven 10-15min.  I put mine on broil for the last few minutes so that the tops were really caramelised.  Set aside until cool enough to handle.  Remove the segments of grapefruit and set aside.  Squeeze the leftover juice to measure 1/2 cup.  Add water if necessary (I didn't need to).
In a large bowl combine the flours, baking powder, grapefruit zest and cinnamon.  In a separate bowl mix the milk, grapefruit juice, egg and oil then add to your dry ingredients.  Fold in segments from 2 grapefruit (about 1/2 cup).
Scoop batter onto oiled waffle maker and cook for about 5min until edges become crispy.  The grapefruit bits that stuck out of the batter stuck a little to my waffle maker so I found myself wiping down the maker between waffles.  Top with any leftover grapefruit segments (highly recommended) and maple syrup.  Enjoy!
Posted by Unknown at 17:19