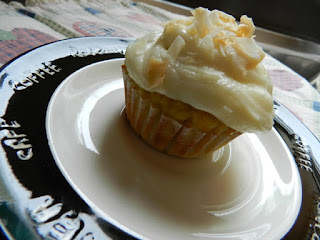 Nothing says 'I love you' like some homemade gluten free (GF) baking.  Huh?  What's that?  You've never heard this before??  Let's back up a little bit.  As food intolerances/allergies increases, so do the number of guests in your life who request these accomodations.  And so often they are left being offered fruit, ice cream or dreadful store bought GF chalky desserts. This is when you arrive armed with the tastiest GF cupcakes to save the day! 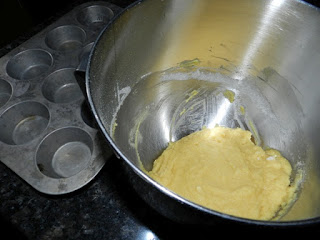 My biggest problem with GF baking is that it so rarely tastes great.  It may taste "great for being GF" but rarely do I want to make a GF dish if I don't have to.  These cupcakes may have changed that thought forever.  I actually regretted telling people they were GF because I think that led to some reluctance to try from those who don't have an intolerance. 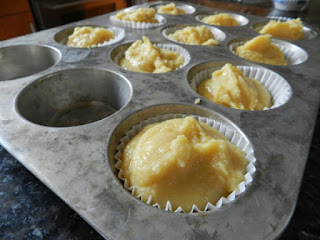 The use of coconut flour is relatively new to me, but I'm certain it will not be my last.  The cupcakes came out dense with great texture.  They didn't rise much and I feared that would mean a heavy rock of a baked good, but I was wrong.  The coconut buttercream icing is a must but the toasted coconut on top is optional.  If you use the toasted coconut, be sure to put it on close to serving time.  After a few hours they lost their crunch and were a little too chewy for my tastes.

Preheat oven to 350degrees.  Beat eggs until fluffy, about 2min.  Add sugar, milk and coconut extract and continue to beat.  Combine coconut flour and baking soda in separate bowl and then slowly add to wet mixture.  Beat until mixed.  Place approx 1/4 cup of batter in lined cupcake pan.  Bake for 30-35min until firm to touch.  Cool completely before icing. 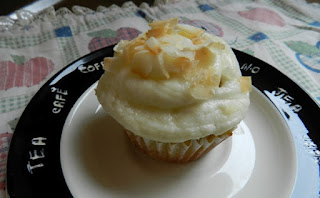 1tsp coconut extract
2-4 Tbsp cream/milk
Beat butter until fluffy.  Add coconut extract and icing sugar and slowly beat, gradually adding cream or milk.  Use as little cream as possible or icing will be runny.  Beat on high for 20seconds until light and fluffy.
Posted by Unknown at 08:31