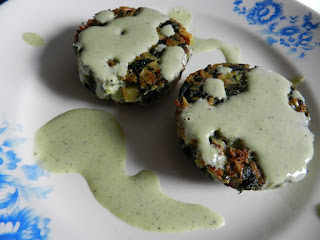 I've mentioned here before how much I like to try new recipes.  It's pretty rare that I will repeat a meal, and when I do it's usually after some time as passed or perhaps the next year when ingredients are in season.  However, these chard cakes have been made three times this week and I have a feeling when I pick up my CSA shares this week, it will make a fourth appearance.  They remind me a bit of the white bean cakes I made earlier this spring and funnily enough, Don was pretty ga-ga about those too. 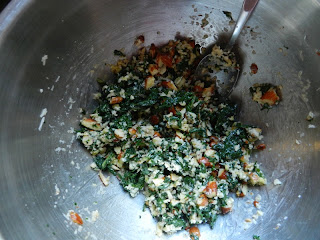 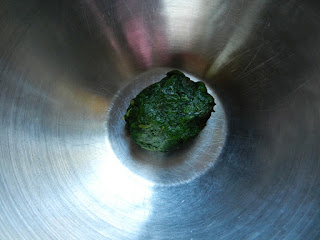 It was Don who kept going on and on about how good these chard cakes are and if there's one way to get me to make a meal, it's tell me how much you like it!  The recipe starts with 4 cups of chard but once you cook it you are left with something closer to 1 cup.  I'm sure you could sub kale or spinach if you prefer, but the earthy flavour of chard is pretty hard to replace. 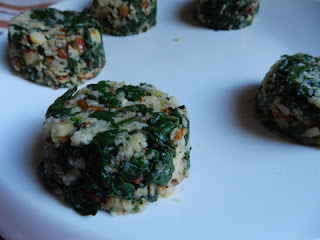 We have enjoyed them both warm and room temperature and both are great.  They will easily pack into a lunch or make for a great appetizer or side.  Our friends have had an ample crop of chard this year and provided us with some of their excess.  It was perhaps a cruel joke when they came for dinner and I served them these.  Here they were trying to get ride of so much chard and I had the nerve to serve them more!  I knew they weren't offended though when one of their kids asked for seconds and the dad wanted the recipe.  If you don't want to make the sauce, I'd suggest some Greek plain yogurt on the side, but Don will swear it's the sauce that really makes them go from good to great. 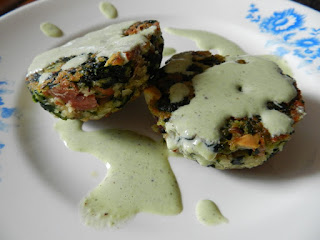 Bring a large pot of water to boil and add chopped chard, simmering for 3-5 min.  Drain and cool chard until you can handle it.  Squeeze excess water from chard and put in large bowl.  In a frying pan, add 1Tbsp coconut oil and chopped almonds.  Saute until lightly browned and then add nuts and oil to chard.  Next add the cheese, egg, breadcrumbs and salt/pepper.  If it's too sticky, add more breadcrumbs.  Shape into patties; I used a 1/3 cup measuring cup as a mold, but it's not necessary.  Original recipe says it makes 8 patties, but I only had six.
Put 2 Tbsp coconut oil in frying pan and add patties.  Fry about 3-5min per side until golden brown.  Transfer onto a plate lined with paper towel to absorb extra oil.  Serve warm or at room temperature with sauce on top or side.
To make the sauce: put all ingredients in blender until mixed.  Can be made up to one day in advance.
Posted by Unknown at 11:09