I've written before about my audition for the Season 2 of the show Recipe to Riches.  In fact, participating in that process was the tipping point of me finally starting a blog.  The recipe I submitted was Hand Pies, in the category of Savoury Snacks.  Last winter, I was devastated when I learned I would not be on the show.  My recipe was in the top five, and out of that five, were the three chosen for TV.  To be so close to the action was tough to accept.  At the time I was desperate to know who they could have possibly selected instead of me and my hand pies.  I found solace in my family and friends who had cheered me along, sampled the multiple variations and developed my marketing plan.  And then, I turned to the web.  Lo and behold, there was this eloquent post from Lyndsey describing the same experience during season 1.  I was so comforted by her openness in sharing the hurt that accompanies being rejected when we put our dreams out for others to judge.  Of course then time passes by, summer comes and before you know it, Recipe to Riches is a distant memory.  The hurt fades and only the happy memories linger. 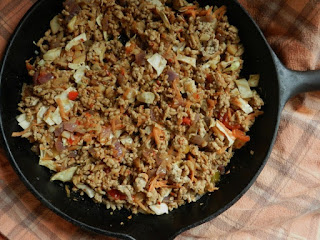 Of course once the ads began promoting the  show on Food Network, you couldn't keep me from watching or reading online profiles of contestants. This was when things got interesting.  I was so pleased when I saw that Lyndsay was one of the contestants.  Here was this woman I had found online kinship with, when in fact, she was the competition!  The world wide web is an awesome place and this little country of ours, is not so big after all.  I was cheering for her success from the onset, but sadly she took second place to the Chipotle Chili Slams.  All three of the recipes in this category looked great and made me realize just how close I really was with my Hand Pies. 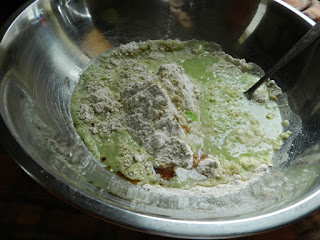 We tried the Chipotle Chili Slams from President's Choice this weekend, just as we will try every winner throughout the season.  We're die hard fans here and regardless of my own experience, we still love to watch the show and try the products.  For the first time, I was compelled to try a recipe from the show as well.  I've been wanting to try a Asian influenced pork dish for awhile.  I keep a list of "things to make" on my phone.  When I'm out at a restaurant or a friend's home, laying awake in the middle of the night or daydreaming while I drive home from work, I often think of meals I want to recreate.  On that list I have about twenty things at present, including: Lettuce Asian Wrap with Pork?  and Asian Pork Dumplings with Wonton Wrappers? 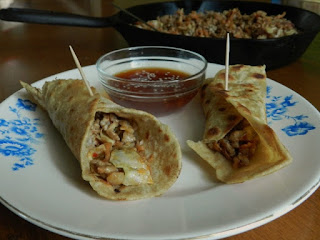 Lyndsay's recipe is neither of these things, but it captures the ideas I had percolating for our family.  I've made a few minor changes, mostly to keep the sous-chefs (children) happy.  Congrats to all the contestants and winners on Recipe to Riches this season.  It's been a great year watching the show, trying the products and dreaming big.  Can't wait til they announce Season Three auditions!

adapted from Recipe to Riches

Scallion Wrapper: In a blender, combine water and scallions.  Heat in a small saucepan until boiling.  Remove from heat and reserve.  Stir together flours and salt.  Add water mixture and sesame oil; stir with wooden spoon until dough starts to come together. Turn out onto floured counter and knead dough until smooth and silky, about 5 minutes. Cover with tea towel. Set aside to rest for 30 minutes.
Divide dough into 15 small balls.  Roll each ball out on floured counter into a thin, round pancake.  Cook each wrapper in large frying pan on medium heat, flipping after 2min.  Spray pan with oil between each wrapper.  Transfer wrappers to serving platter, placing paper towel between each one.
Pork Filling: In a large frying pan on medium-high heat cook pork and onions, stirring to break up meat, for 10 to 12 minutes or until pork is browned and onions are tender. Stir in garlic, ginger, cabbage, carrots and water chestnuts and cook for 2 minutes. Stir in hoisin sauce,  soy sauce, Asian chili garlic sauce and cook for 2 minutes longer. Remove pan from stove. Set aside; cover to hold warm.

To serve, transfer meat mixture to a serving bowl. At the table, everyone place some meat mixture in a wrapper, folds it and dips in sauce.