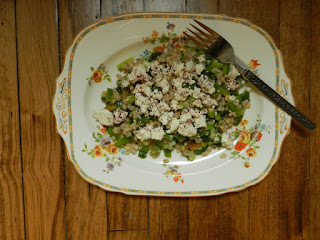 Every once in awhile a cookbook comes along that can truly change your perspective on food.  For me, that cookbook was Plenty by Yotam Ottolenghi.  Not that this is an original or even surprising idea.  His take on vegetables pretty much took the culinary world by storm, with multiple accolades and awards.  When I heard that he had teamed up with Sami Tamimi to create a new book I crossed my fingers that it would be just as amazing.  Folks: these men do not disappoint. 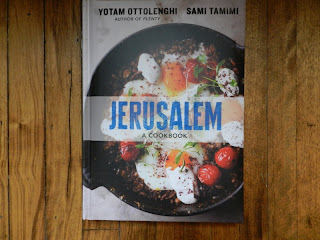 Jerusalem is an amazing volume of both recipes and stories.  You've likely read about this by now, but briefly, it is a collection of authentic recipes from Jerusalem.  The two authors were both born in the city, one in the Jewish west and the other in the Arab east.  They come together to recreate recipes that are both familiar to my North American palate and many that are yet to be explored.  I have no doubt I'll be cooking from this one for years to come. 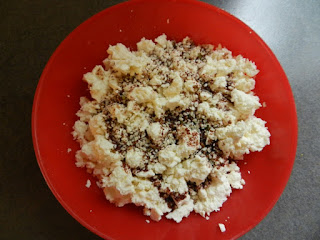 In any other cookbook a title like "Parsley & Barley Salad" would be a page turner for me.  Sounds too average, too mainstream, too dull.  In other words, a perfect recipe to see just what these two authors can create to prove me wrong.  And prove me wrong they did.  A tasty salad that just gets better with time.  The crushed cashews add a great flavour and crunch.  My love of za'atar is well established on this blog and it provides a depth of flavour unmatched by other spices.  The salad is a light tasting with a zing from the lemon but filling enough to eat on it's own for lunch.  Ottolenghi suggests it accompany a heavier meat dish and given just how right everything he creates is, I'd be remiss not to echo his advice. 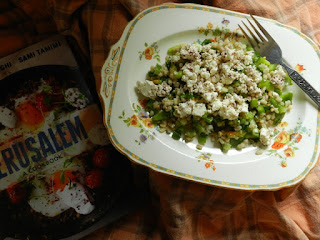 Fill a medium pot with water and bring to a boil, then add barley.  Boil for about 30min, until barley is tender but still chewy.  Drain and reserve in a large bowl.
While barley is cooking, mix together 2 Tbsp olive oil, za'atar, coriander and cumin.  Pour over broken feta pieces and gently mix together to marinate.
To the barley, add parsley, green onion, garlic, cashews, green pepper, lemon juice and salt/pepper.  Divide among four plates and top with the marinated feta.  Enjoy!