Pecan Pie with Bacon and Scotch 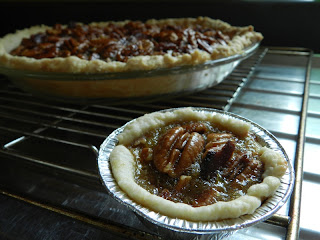 If you’ve been around here much, you know the words Bacon, Scotch and Pie are a little out of place.  Looking for a nice salad or main course starring veggies?  You’re in the right place.  But everyone once and awhile, there is a recipe that will push me out of my zone.  When I saw the original recipe for Bacon Bourbon Pie I immediately thought of my bacon loving friend Nick.  The first time we were at a restaurant together he noticed Don had removed the bacon from his sandwich.  Perplexed by any man who would skip the bacon, Nick demanded to know “why is that bacon sitting on your plate?”  Don indicated that he doesn’t care for the stuff but he also doesn’t want to inconvenience the chef. So whenever ordering a dish that contains bacon, he simply removes it and leaves it on his plate.  Faster than you can say “this little piggy” that bacon was off Don’s plate and into Nick’s mouth. 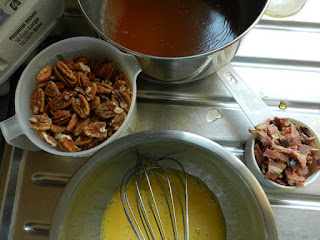 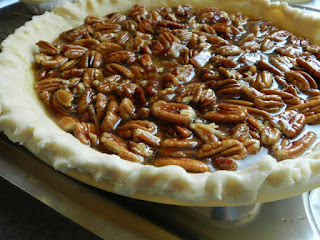 Jos and I delivered the pie last week.  I don’t know if he smelled the bacon from his front step or saw us through the window but I could hear his bellowing laugh followed by “I can’t believe you made me that pie!  You are crazy!!” before the door even opened.   When I made the pie I saved enough pastry and filling to make a little tart.  Even if I thought it wouldn’t be good, I needed to taste a little to find out.  Was it good?  Well… it was sweet and salty and… actually pretty tasty.  Nick tells me it’s amazing and well worth the 3 less years he will likely live from eating it all in one sitting. 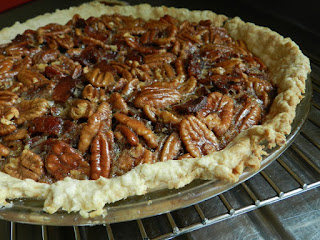 Pecan Pie with Bacon and Scotch

In a large frying pan, cook 6-10 slices of bacon til crispy.  Drain grease and put in fridge to solidify.  Crumble bacon to measure ½ cup.
Making the crust: Whisk together the flour, salt and sugar in a large bowl. Add the bacon grease and incorporate using two knives. Cut in the butter just until it is reduced to small, pea-sized pieces. Sprinkle the Scotch and water over the mixture, and stir together just until incorporated. Gently press the crumbly mixture together with the palm of your hand just until it comes together to form a dough. Mold the dough into a disc roughly 6 inches in diameter. Cover the disc tightly with plastic wrap and refrigerate overnight (original recipe says 2hr minimum).
On a lightly floured surface, roll the dough out into a round roughly 13 inches in diameter. The dough is a little crumbly, but it will come together as it warms up a little.  Place in a 9-inch pie plate.  Freeze the formed shell for 20 to 30 minutes before filling and baking.
Assembling the pie: Preheat to 350°F.  Whisk syrup, brown sugar, golden syrup and butter in medium saucepan over medium heat until sugar dissolves and butter melts. Increase heat and boil 1 minute. Cool mixture to lukewarm, about 45 minutes.
Whisk eggs, vanilla and salt in 4-cup measuring cup to blend. Gradually whisk maple syrup mixture into egg mixture. Stir in the pecan halves, bacon, and Scotch. Pour filling into frozen crust. Bake pie until filling is slightly puffed around edges and centre is set, about 55 minutes. Cool pie completely on rack.  Can be prepared up to 8 hours ahead. Let stand at room temperature. Cut pie into wedges and serve.
Posted by Unknown at 09:27