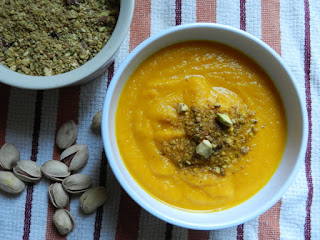 I hate when Don is right.  Doesn't really matter what it's about, I just kinda figure I should win most arguments we have.  Funny thing is, he agrees with this.  Most times if I put up any sort of resistance, he will relent and say "you're right."  Now don't go thinking I'm some sort of bully or that he is any kind of pushover, both are far from the truth.  It's more that over the years we have both come to this realization.  My memory is far better than his, so he always trusts my version of history.  I read a ridiculous amount of news articles in various papers, so my knowledge of current events is usually greater.  And when it comes to food?  Well, it's fair to say most days he wouldn't dare disagree with my thoughts on what makes a good meal. 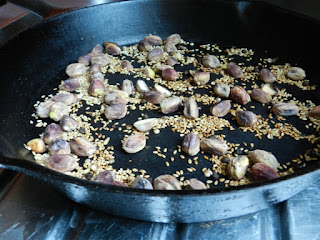 That was until we had this soup.  The first time I served it to Don he said "I think there is something wrong with that stuff on top.  It needs to be ground more."  He was tasting it before me and so without even a spoonful having hit my lips, I was disagreeing.  The smells that came from the nuts and spices roasting told me this was a good soup.  The carmelized carrots were roasted to perfection.  I knew in my bones this was a winner and Don was clearly wrong. 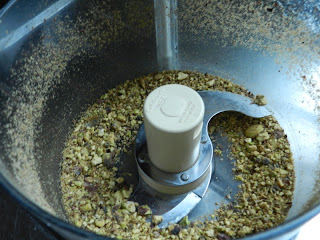 That was I until I tasted the soup.  Dammit, he was right.  The spices did need to be ground up more!  Second time around I gave the spices a longer whirl in the food processor and the result was exactly what we both were looking for.  A tasty soup with exotic spices and a pleasant pistachio crunch.  The instructions below reflect this small change, which Don was right about after all.﻿ 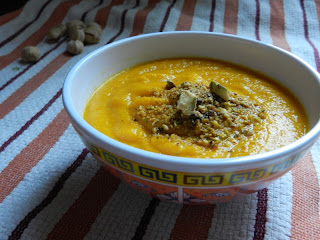 To make soup:
Preheat oven to 425degrees.  On a large rimmed baking sheet toss carrots with coconut oil, cumin, salt and cayenne.  Roast until browned and tender (about 25min).  Cool slightly and place in food processor with 2 cups broth.  Blend until very smooth.  If space allows, add more broth.  Pour soup and any leftover broth into a medium pot and bring to a simmer.  Add water if soup is too thick.  Season with salt and pepper.
To make dukkah spice:
In a cast iron pan, over medium heat, toast pistachios until brown (about 5min).  Add sesame, coriander, fennel seeds and peppercorns.  Toast 1-2min more until fragrant.  Transfer to a plate and allow to cool.  Place nuts and spices in food processor and grind until spices are very fine.
Serve soup with a sprinkle of dukkah spice on top.  Enjoy!
Posted by Unknown at 17:26