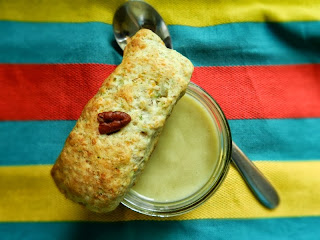 There has been an absence of posts here lately.  I've got no great excuse for the lull.  We are a busy family (as usual), but that doesn't generally stop me from finding time to write here.  I suppose the full schedule has led to a little less creativity in the kitchen.  We've had more meals that would satisfy the kids than most readers here.  Sometimes catering to their carb loving ways allows my energy to be focused elsewhere in the organization of family life. 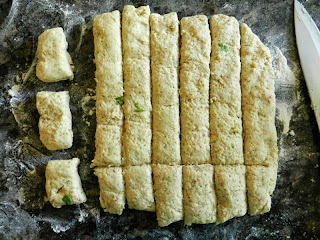 To make up for the pause, I've got a two-for-one recipe today.  We enjoyed this combo at a baby shower I hosted this weekend.  Planning a party menu is one of my favourite activities.  My partner in crime and co-host of the party listened to me brainstorm for days.  The goal was to have food entirely without cutlery and the majority made well in advance.  It was a great success and all the guests enjoyed the many bites we created. 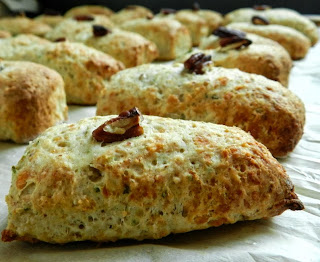 The soup and scone paired nicely together, but either on it's own is tasty too.  Jos felt the scones were more of a bread stick than an actual scone and I've got to agree with her.  The soup can be served hot, warm, room temperature or cold.  I'm not usually a fan of cold soup, but you know what?  I think this one tasted the best cold.  Maybe I just wanted to persuade myself of that so it could be served that way for the party. 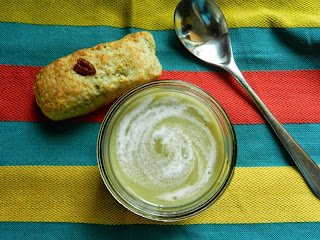 3 Tbsp  butter
3 leeks, thinly sliced
2 medium potatoes
4 cups vegetable broth
½ cup  cream
½ tsp cinnamon,
½ tsp nutmeg,
salt and pepper
Melt butter in a large pot over medium-low heat. When bubbling, add leeks. Cook, stirring often until softened and caramelized, 15 to 25 minutes. Stir more frequently towards the end of leeks caramelizing. If browning too quickly, reduce heat. Meanwhile, peel and chop potatoes. When leeks are caramelized, add potato and broth. Bring to a boil. Simmer for 10 to 15 minutes or until potato is tender. Remove from heat and let cool slightly.
Puree soup in blender in batches.  Return to pot and add cream and spices.  Serve warm or allow to cool and serve cold.

1 cup all-purpose flour
1 cup whole wheat flour
3 tsp baking powder
1 tsp salt
4 Tbsp cold butter
1 cup grated Gruyère
1 cup chopped pecans
4 Tbsp chopped fresh parsley
½ cup  milk
½ cup  cream
Preheat oven to 425degrees.  Line a baking sheet with parchment paper and reserve.
In a food processor combine flours, baking powder and salt.  Add butter in cubes and pulse a couple times until butter is about the size of large peas.  Add cheese and parsley and pulse a couple times more.  With motor running, add cream and milk and combine until a ball forms.  On a floured surface work pecans into dough and form into a large rectangle about 3/4" thick.  Cut into finger size scones if serving on soup bowels.  Alternately can be made into larger squares or triangles.
Place on baking sheet and bake 7-10min, until lightly browned.  Remove and cool on rack. 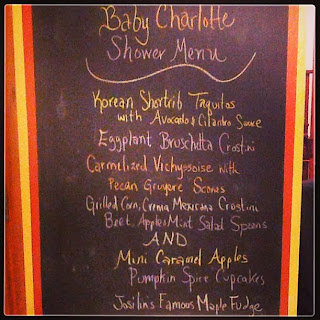